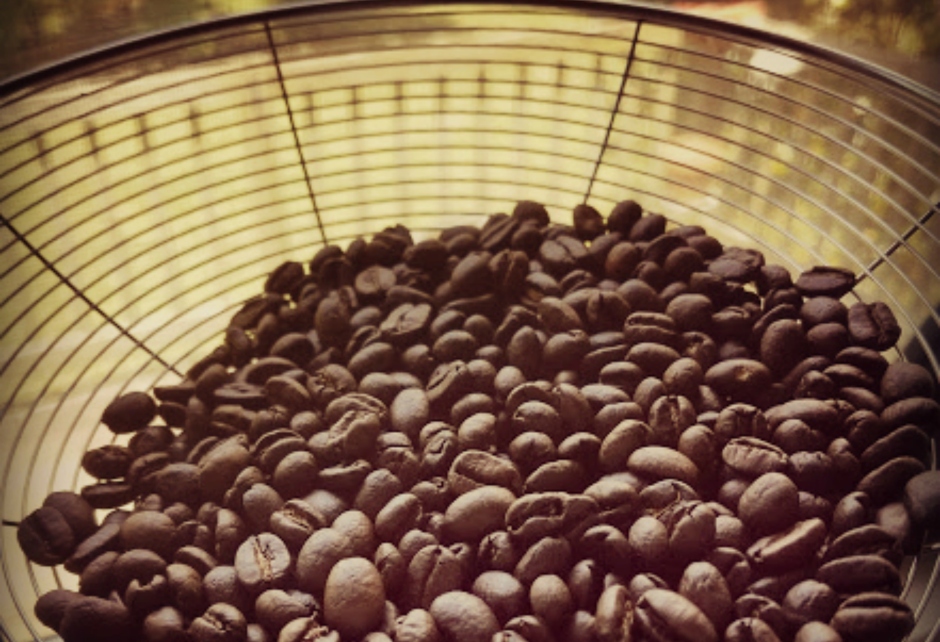 Few people know that I craft home roasted coffees from Africa, South America and Hawaii. What started as a hobby has now turned into a definite obsession. My small Nesco Roaster will roast about a quarter of a pound of green coffee per batch to my liking. For me, it’s not a set it and forget it kind of thing, I stand there and stare at the beans whirling around in circles as they begin roasting, watch for their color to change from green – to yellow – to walnut, chocolate and finally that deep color that gives me such a thrill! I listen for those pleasing cracks as they go through the two stages of de-gassing and shedding their chaff … and finally when they sweat off that glistening dry oil that when heated up smells so heavenly!

This is one of my favorite coffees to roast because of the amazing scent it puts out early in the roast! You can tell by the beans that they are going to be quite chaffy, so I give them a brisk rubbing with a non-terry kitchen towel to loosen as much of it as I can before I begin.

Green coffee beans (unroasted) smell very much like grass when you open a fresh bag.  The first thing I do when I’m prepping for a roast is go through my beans and pick out any small twigs, pieces of string, or pebbles that end up in the bag.  The twigs and string will ignite in your roaster … and the pebbles will just kill it … so be sure to make a quick look at your beans.  If there are peewee’s in the mix (smaller beans), pick those out as well because they will roast earlier and then burn, otherwise ruining the entire batch if there are too many in there.  It’s better to check than wish you had later when you’re dumping a sad little batch of beans in the trash.

The roaster I use is a Nesco Professional Coffee Roaster. It suppresses the smoke and it quiet enough that you can hear the beans as they crack during the expanding and releasing stages. Here, my roaster is cycling through the cool down stage. There beans are still cooking on the inside, but the roaster itself is cooling down. Once it stops, I break ALL the rules and open it up to allow extra air to get to my beans, but I wait a full five minutes before removing them. 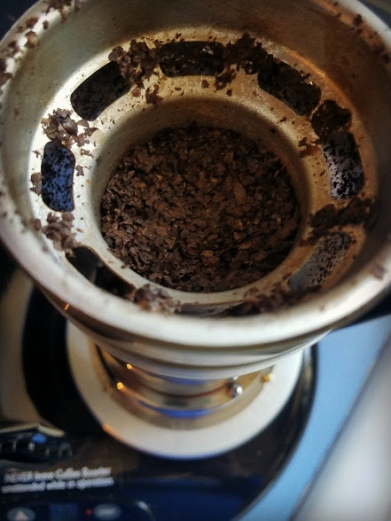 Once you open up the roaster and remove the screen over the chaff cup, you’ll see how much chaff has collected in the cup!  These were incredibly chaffy beans and since so much chaff collected in the cup, I’m expecting this roast to be incredibly smooth. The chaff from the cup is tossed in my garden along with left over coffee grounds.  I’m always happy when I see the chaff cup this full!  I know I’m going to have a good finished product. 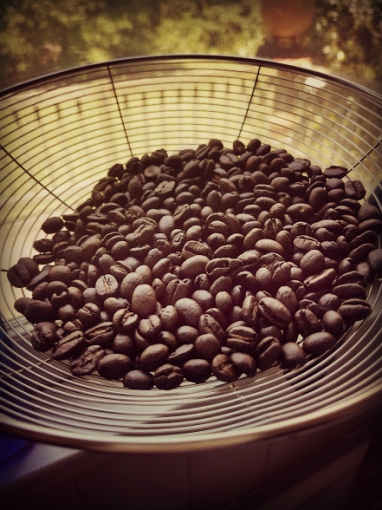 After the beans have cooled the five minutes in the roaster (not what the instructions in the book says – but my method seems to work a little better), I remove the chaff cup and dump the warm beans into a wide-toothed sieve and shake off all the excess chaff.  I got this sieve at an Asian market and it’s actually for dipping stuff out of hot grease, but it works perfectly at removing chaff from freshly roasted coffee!  Shake until no more chaff falls and then set them aside to cool. 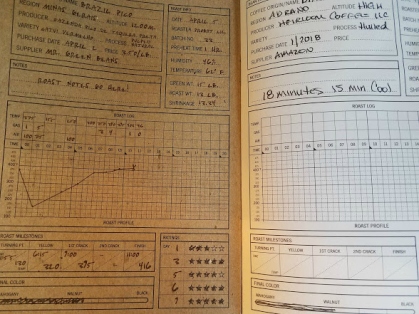 While the beans are cooling I make sure I’ve noted everything in my log book so I know how I roasted my beans.  I keep a thorough record of how long each type of bean roasted so I can pinpoint roast times on light, medium and dark roast … or if you want to be particular, you can throw light city, city, and dark city in there as well.  I also make a note of how many ounces of beans I roasted … believe it or not, that has a HUGE impact of the coffee finish. 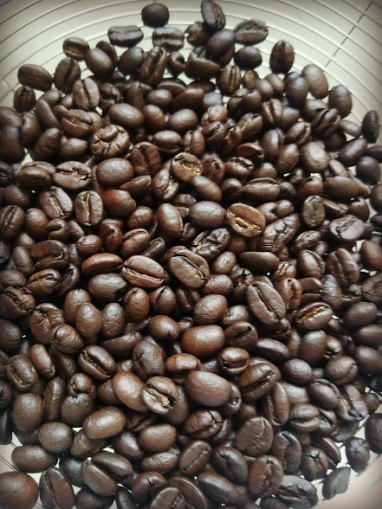 This is also a good time to go over your now roasted beans for a quality check.  In the photo above, you can tell that there are some very dark beans, some uncracked beans, and some beans that are very light in color.  Anything non-uniform in your roast will effect the final outcome of your roast. 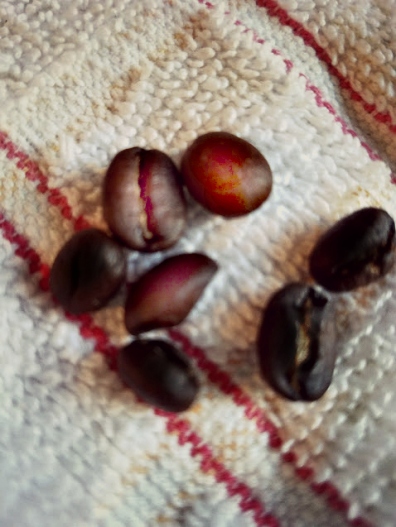 I go through my roasted beans and pick out the too-dark ones, the lighter ones (which probably weren’t quite ripe), and the ones that didn’t either split or crack during the roast.  There were seven in this roast that didn’t make the cut. 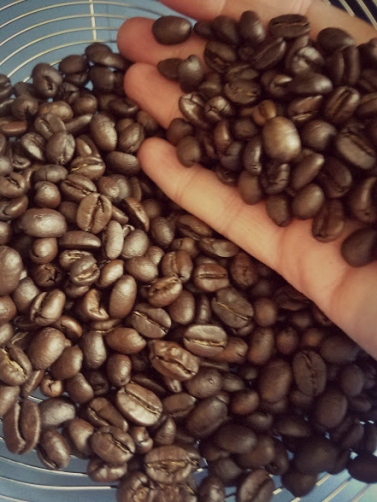 A good batch is uniform in color with very little chaff showing after running through the sieve.  This photo is of early season Kona Coffee Beans and it’s usual for them to be varied in sizes, but they all roast evenly.  The more you roast, the more you learn which beans will roast evenly and which ones won’t.  Costa Rican beans are more temperamental but more fragrant than most when roasting, but Kona is one of the easiest to roast.  Tanzanian is also an easy first roast coffee and makes for an amazing cup of coffee!  Nothing beats Tanzanian Peaberry for the scent during brewing!

I package and date all the coffees I roast and let them degas for at least 24 hours before opening the bag.  I won’t go far as to say it will ruin the roast, but it does a lot to soften the boldness of a good roast … so I set mine out of sight and out of mind until they are ready to open and enjoy or send to friends. 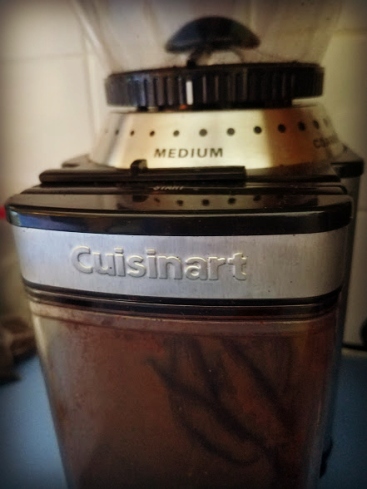 People always ask what kind of coffee grinder I have.  Mine is a Cuisinart Burr Coffee Grinder.  It will grind anything from the finest grind on up to the most coarse … the the burr is never a problem.  This photo was right after doing a fine espresso roast for a neighbor.  The lines on the side are where I was testing the looseness of the grind.  I washed it right after, but I’m always fascinated with the fact this grinder will grind coffee as fine as powder.

I store my coffee in plastic containers and never EVER refrigerate or freeze your fresh coffee.  Grind your beans for only as much as you’ll use in two days and keep your freshly ground beans in an air-tight bag or container.  That goes for the ground beans as well.  I generally use one heaping tablespoon for a cup of coffee in a French Press.

It won't pay for the house I'm building, but maybe it will be a start! Share my daily ramblings as I make my way to Waynesville, NC!

This site uses Akismet to reduce spam. Learn how your comment data is processed.