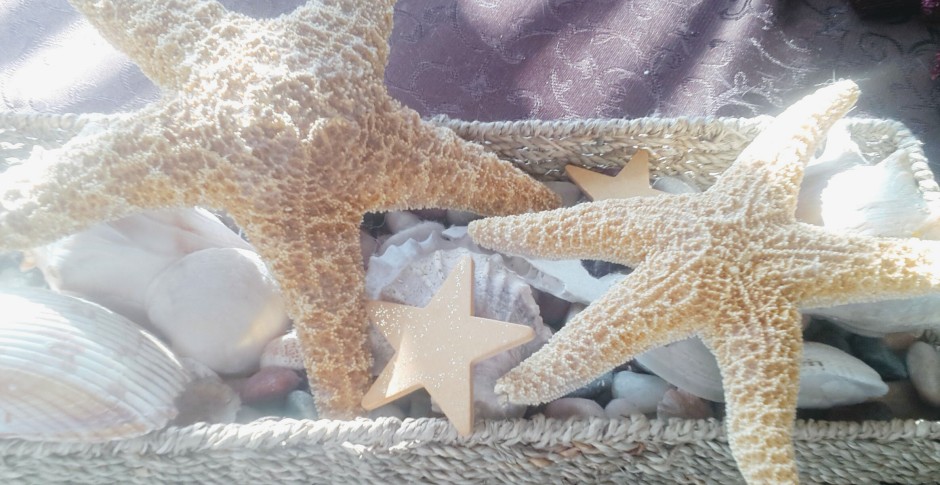 I came by it naturally … my obsession with rocks, shells , acorns, buttons from shirts, and so forth. My mother had the obsession is well. Everywhere we would go, she would pick up small rocks as a memento that we had been there – sort of like prehistoric Polaroids.

When I was just a little kid, we would be driving down a country road when Mom would suddenly holler for Dad to “Stop the car Cecil”, so we could all get out and haul a rather gigantic rock into the trunk. Sometimes it took all three of us to move the occasional boulder, but Dad was always so good natured about it. He loved Mom enough to let her bring home any rock she desired because she loved them so.

I don’t know how genetics work, but somehow, I too, am famously obsessed with them. All around the house stuff like seashells, rocks, acorns and old handkerchiefs have a special place.  I even have a small box of buttons. But rocks … those have become my true hearts desire.  Some are on display …. some are tucked away.

These days, when people go on vacation, they ask me what they can bring me back as a souvenir. My answer is always the same … “Just go find me a rock!”

Rocks are one of the things I truly enjoy the most in life! I love feeling of the rocks and sometimes I’ll actually smell them to see if they carry a bit of their homeland with them … like Pakistan or Germany! Both of those had a unique t scent.  And while I won’t readily admit to it, a few people have accused me of sticking my tongue to a couple. But what I enjoy most about the “getting part” … is the story that’s always attached to it: how they got it, where they got it, sometimes there are photos .. but the “rocks story” is always lovely to hear.

My friend’s know me well and they tell me they actually enjoy going out and searching for the most perfect rock for me! One friend and his family searched the shoreline of Iceland for hours until they found one of the most interesting ones in my collection. All five of them were picking up rock after rock on the beach and his kids were arguing about who had found the best rock.  It was getting late and suddenly there was a bright flash on the shoreline that got everyones attention. The Northern Lights were lighting up the evening sky!  One small rock at at the waters edge caught the eye of his four year old grandson as it reflected the glow of the glistening Aurora Borealis!  THAT was the rock they brought me back.  Dan said his grandson held it in his hand all the back from Reykjavik!

I’ve been mailed rocks from some of the most beautiful places in the world! Friends send the rock and later post photos on their social page of the rock on the ground, a photo of them picking it up, and usually a photo of them with the rock standing in the beautiful scene! It’s become a “THING”!  Friends online will pick a rock up from their yard and send it to me and do the same thing!  Then there are those who include me in their incredible travel adventures and bring rocks back from places I dream of traveling …. like the Holy Land, the pyramids of Egypt, Stonehenge, the Vatican, the high mountains of Peru, the deep caves of Mexico, and the peaks of the tallest mountains in the world!  (I have rocks from 8 of the top ten peaks … and yes, Everest is one of them!)

So do you understand why I love rocks yet?

I have a THEORY about my rocks. Each rock that is being picked up and given to me has more than likely stayed in that general spot for millions of years … but in my theory, it has a destiny.  It, by destiny, is selected out of all the other rocks and picked up just for me. The fingers that touched it and handed off to me, may be the only figures in history to ever have touched it. Some of my rocks are from the other side of the Earth but yet they end up here with me and placed in a very loved collection with other rocks from all over the world. That part I know.  The “destiny theory” … well, I’m still mulling that one over.

As for the acorns, I place them in soil and watch them grow. Oak trees from the Middle East and Russia grow side by side in my yard, yet no one would ever know at a glance. But I know … and the people who gave them to me know.

On my property in Waynesville, I’ve buried over two dozen oak acorns from all over the world. I can hardly wait till spring when they wake up and poke their tops up through the soil!

In my basement I have a lot of my mother’s things.

Among those things is a ream size paper box and four metal coffee cans filled with thousands of small adorable rocks. A friend of mine suggested I go to a specialty mill and have a large sheet of Plexiglas poured and put part of my collection in it, that way I could see it them from both sides.  She said it would make an incredible looking room divider or shower doors and frames.

I’ve also thought about doing one of the many rock designs you see on Pinterest.  For now though, I take comfort in the fact that I’m simply obsessed with them.  Each one, MILLIONS and MILLIONS of years in the making …. and I and only a tiny part of its story.